Emotions in FAtiMA are based on the OCC theory of emotions: 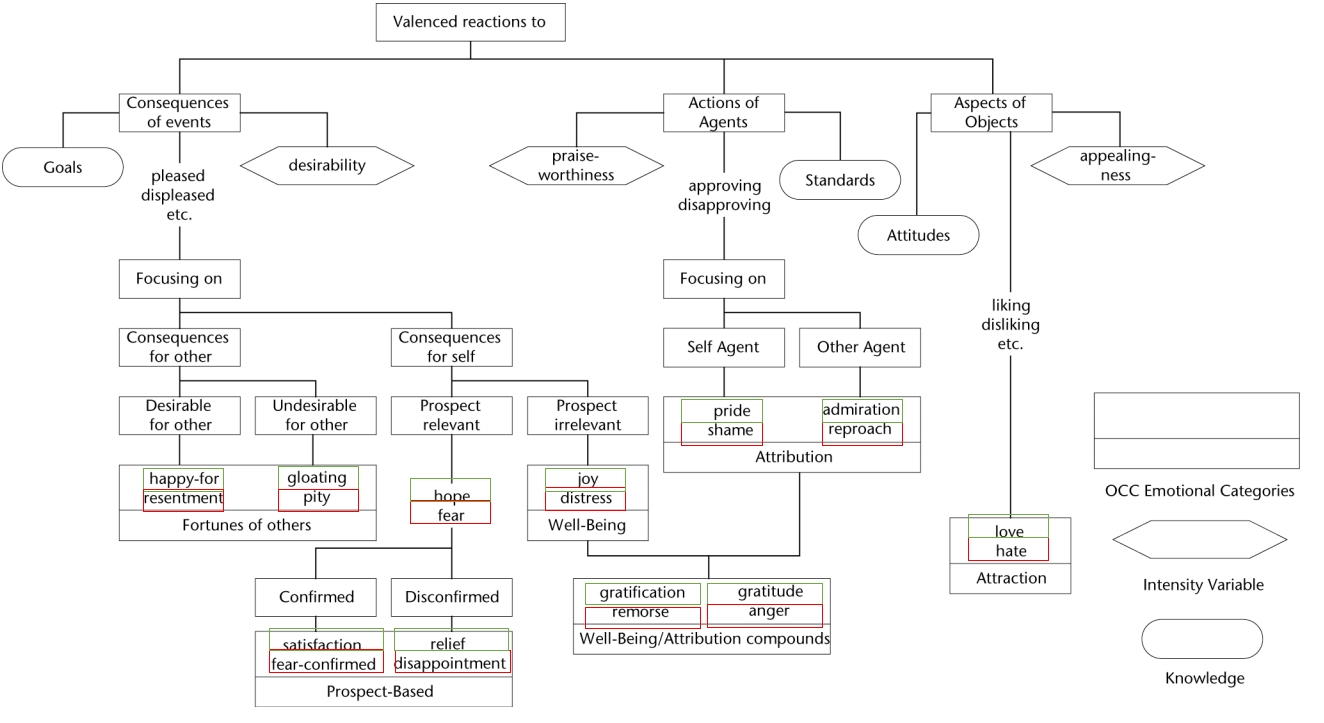 Appraisal Process – What does an agent feel about an event?

In FAtiMA the appraisal process is defined by two main steps, the Appraisal Derivation and the Affect Derivation.

The first, Appraisal Derivation, determines what appraisal variables are affected by the event and their value.

The second, Affect Derivation, computes what emotions are being triggered by those variables, their intensity and the resulting mood which in turn will affect the agent’s emotional state.

Appraisal rules determine how an agent subjectively evaluates events. This is done by defining event templates, that associate events with the OCC variables.

Let’s take a look at how this works in the Authoring Tool. Charlie feels happier every time someone gives him money:

Appraisal rules may also have conditions. In the gif above I defined that whenever the Charlie agent perceives an event of the type GivesMoney([x]), if variable [x] is bigger than 0 then he would appraise the event with desirability of 5.
An even better to have done it would be to set the desirability to have the same value as [x], this way the desirability of the event would change according to the amount of money received:

Another appraisal rule example, this time with conditions:

Note: “SELF” is a special reserved word that is substituted by the agent’s real name when being evaluated.

In FAtiMA there are 5 different appraisal variables:

Authors can use any of them in an Appraisal Rule. The picture shown in the beginning of the page captures how each emotion is generated. Here is another description, taken from the article: “The OCC Model Revisited“.

In FAtiMA Toolkit we are able to generate all emotions mentions above. In the following figure we describe which variables authors should use to capture each emotional groups: 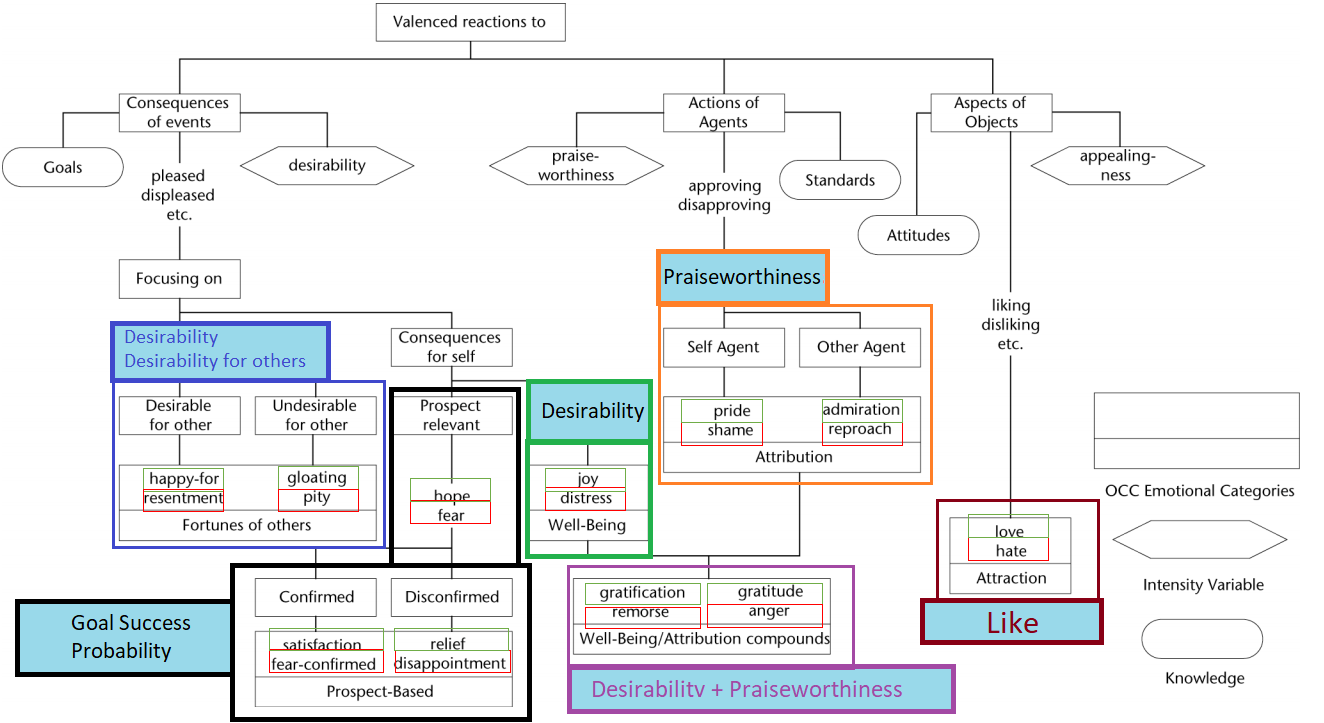 The main difference between the emotions attributed to the Praiseworthiness Appraisal Variable concerns who the actor of the action is. If the agent him/herself is responsible for the action that is being appraised then it generates either “Pride or Shame”. If the action was performed by someone else then it can lead to either “Admiration or Reproach”. The same process is also applied to the “Well-Being/ Attribution compounds” emotions.

While FAtiMA’s emotional appraisal is based on the OCC Model, the current version deviates a bit regarding the “Goals” component.

Goals are defined by: 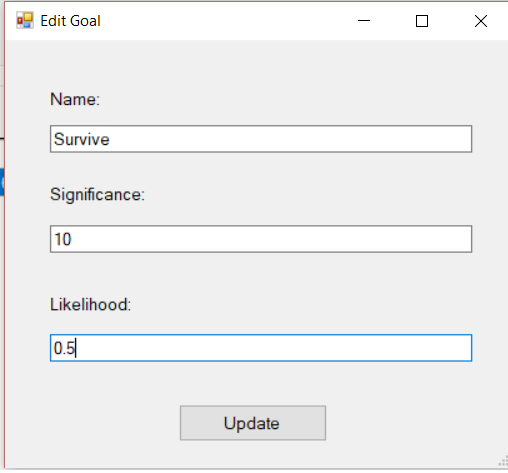 Once the goal is added it is possible to add an appraisal variable related to it when defining an appraisal rule. 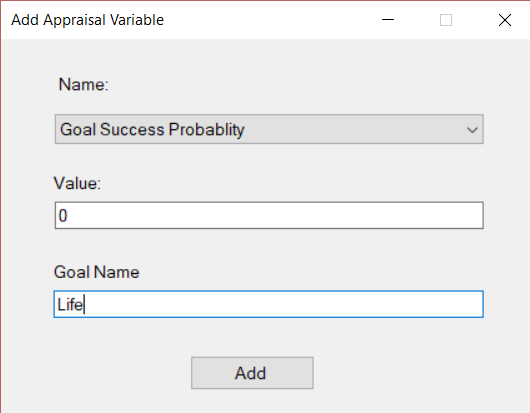 Which results in the figure below:

The differences between FAtiMA and the OCC model, start in the two assumptions we make. First of we consider that all goals are something the agent wants to attain, and, as such they should all be “positive”. For instance, the goal that “the agent does not want to die” should be be “the agent wants to live/survive”. 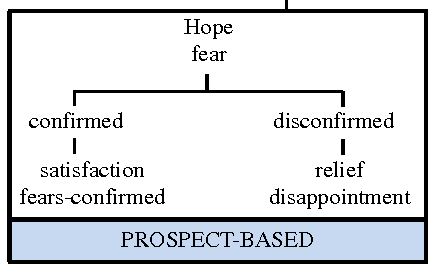 At the moment we consider that a goal has been confirmed it case it has reached its goal or it has failed. In our case its likelihood has reached one of the extremes, either 0 or 1. Now, another factor comes into account, the likelihood of the goal before a certain event.

We consider that emotions of relief and disappointment happen when there is a major shift in the prospect of a goal. When the agent expects something to happen but its probability drastically changes. For example, if an event such as “Live” had a low likelihood and, all of the sudden, its probability increases a lot then the agent feels Relief.

So now we have two factors, current and previous likelihood and the expectation/result:

These assumptions and adaptations are aligned with our interpretation of the OCC Model and as always might be subject to changes in the future.

Next let’s take a look at the Emotional Decision Making module.