Dialogue trees are still the most familiar solution for game developers. A dialog tree is a tree of possible choices for the player to make in conversation with an NPC. This is an extremely popular method for NPC-player interaction, allowing the player to make choices (or at least the illusion of choices) in the game while progression the conversation in a controlled manner.

However, they are finite state machines which have a lot of scalability problems. While in for short conversations it might be sustainable, it quickly becomes too complex or difficult to author in long-term interactions.

Additionally they provide no room for agency from the side of the “computer controlled characters”. 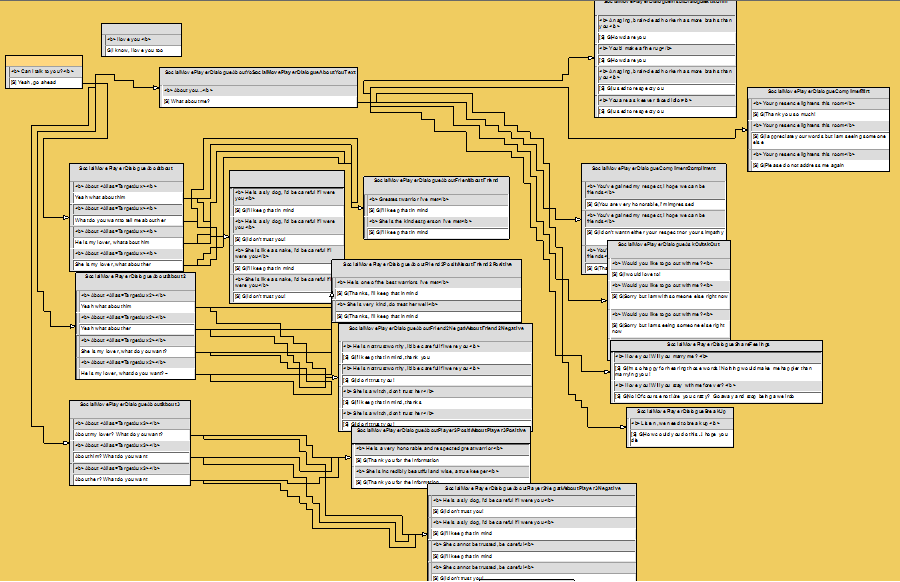 For example, the image on the left shows the dialogue tree for a single social interaction used the in the Skyrim Mod: “Social NPCs”. I used this particular example because I’m the author of that mod and consequently I can use that image for all its purposes. If you want to learn more about that work you can read the paper: CiF-CK: An architecture for Social NPCs in commercial games.

FAtiMA’s approach to dialogue is what we consider to be a hybrid solution:

Each utterance is coded as a dialogue action with the following properties:

The dialogue manager does not make decisions for the agents (nor the player). Instead, it tells the agent what are the available options that it can choose from.

This is achieved with a Meta-Belief (which we will talk about next) that is registered in the agent’s KB:

Before we move on to the Meta-Beliefs let’s apply what we’ve learned to our scenario. Let’s add some dialogues to the Integrated Authoring Tool’s Dialogue Editor.

I’ve added 5 different dialogue actions. Each has a current state and a next state. This functions as if it were a finite state machine. Let’s say that in one of the states I wanted to add another option, it would look like this:

When the agent or the player is in the S2 state it can choose between answering “I’m feeling great!” and “Not that great actually”.

Previously we defined the “Insult” and “DrinkCofee” action in the agent’s emotional decision making asset, let’s add another with the following template:

Note: The following example worked in previous versions of FAtiMA-Toolkit. Recently we are of the opinion that it does not make sense to write an action rule with “*”. It is not aligned with our approach. Instead we can write rules with variables and those variables can then become anything in the conditions.

As we’ve just said, Dialogue in particular is handled by the Speak action rule, this rule has 4 different parameters: [currentState] , [nextState] , [meaning] and  [style]

Their value must be specified in the conditions.

There are multiple ways to do this:

Query the knowledge base:

ValidDialogue is a meta belief, essentially it is a function that determines if there is a valid dialogue (withing the Dialogue pool) with the variables given to that function. more importantly, if the parameters have no value attributed to them it will return with all possible substitutions.

Typically, we use this conditions together, for instance to say that I want the current state ([cs]) to be handled by the Knowledge base but the other parameters can be anything that exists in the pool:

In this cases we usually add to the agent’s knowledge base a belief regarding the state of the conversation of them with another: DialogueState(Sophia) = Start.

Following the tutorial will go a little bit further into this approach and how we typically manage both the CurrentState and the Next State parameters. However please take into account that Speak(*,*,*,*) is not possible in the most recent FAtiMA releases.

In order to better show how this mechanism works let’s add a rule that allows the agent to use any dialogue. In FAtiMA the ” * ” symbol is a way of saying all, let’s try adding the following rule: 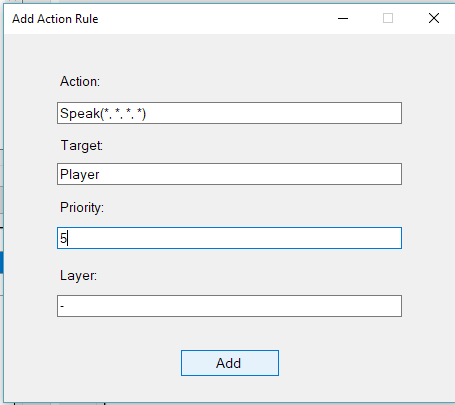 It basically means that the agent will decide to speak with any current state, any next state, any meaning and any style.

If you want to see this working you can use the Simulator within the Authoring Tool, each time we click the “Start” button the Charlie agent will say something different.

Let’s try to make him start the conversation according to what we defined, we need to tell him to use a dialogue with the correct Current State.

As a result we can attribute a value to the [currentState] variable in the EDM:

Note: The variable name can be anything you desire as long as they are within “[ ]”. Additionally they must be in the correct order in the action Template, as in, the Current State variable must be the first argument of the “Speak “Action Template.

It is now possible to tell the difference in the simulator, if the agent has the beliefs we described earlier, specifically:

By hitting the “Start” button the Charlie agent is now only deciding to execute the action “Speak(Start, * ,* , * )”, which in our Dialogue Manager corresponds to only one possible utterance: “Hi how are you?”.

Let’s do the same for the Player RPC character. However, let’s try and instead of naming the target of the action, use a variable. Because we already use the name of the agent in the beliefs: “DialogueState(Charlie) = Start”, FAtiMA is able to “retrieve” the value. This is the result: 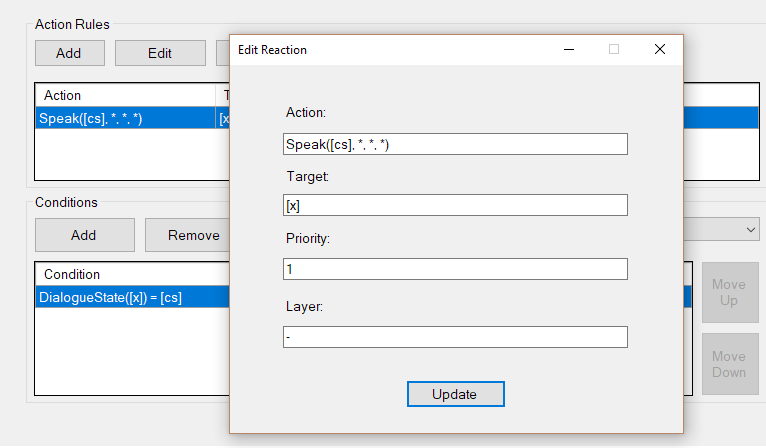 Here we defined the Target as variable [x] and then in the conditions we specified that the [x] value is in the DialogueState belief. In the simulator we can take a look at the results. In this case both the Player and the Charlie agent only have one possible action. 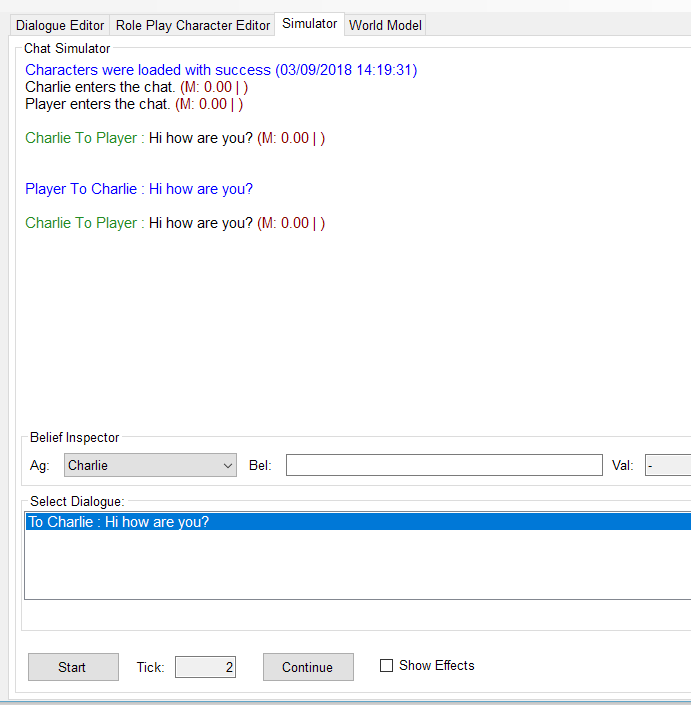 In FAtiMA 4.0 it is possible to use beliefs in the utterances using the [[ ]] symbol.

For example:
Utterance: Well, I haven’t been able to sleep well the past couple of months [[DialogueState(Player)]]

Result: “Well, I haven’t been able to sleep well the past couple of months Concern”

In order to move to the next state there needs to be a way to define what changes after each event, this is done through the World Model.